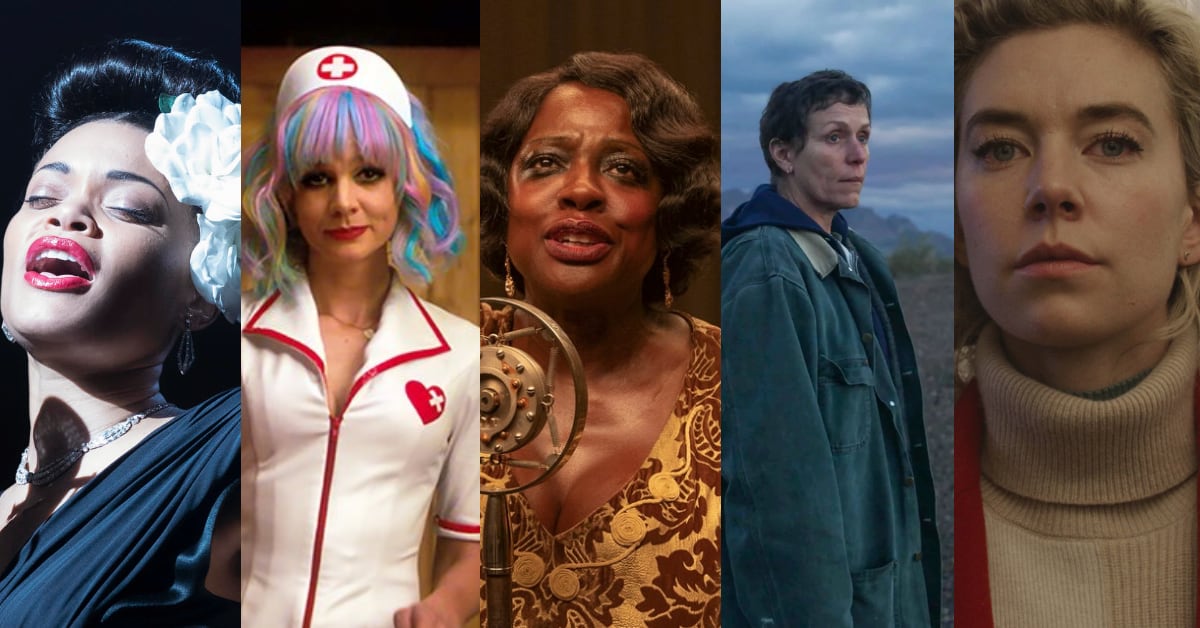 The Best Actress race this year is unusually wide open this year! We've got your breakdown of all 5 fiercely talented nominees!

During a typical awards season, we’d feel pretty confident to begin engraving Oscars statues with the winners’ names at this point in the game. (Remember last year’s coronation of Renée Zellweger for her work in Judy?)

In case you haven’t noticed- this is FAR from your typical year. Beyond the COVID of it all, the delayed timeframe, and the fact that none of us have actually BEEN to a movie theatre in over a year- we have somehow reached the weekend of the Oscars with no clear frontrunners for Best Actress!

Now don’t get it twisted! This is not because we did not get any worthy performances this year. In fact, it’s quite the opposite! These leading ladies all turned out SUCH phenomenal performances that it’s hard to only pick one to crown! We’ve reached out to the Academy to see if a 5-way tie is possible, but have yet to get a comment back. (And let’s be real- what’s the fun of an award show without winners and losers?!?)

The category is TIGHT and it’s truly anybody’s game- but here’s a rundown of the 5 nominees along with some thoughts from our PopViewers that might help you as you fill out your prediction ballots!

The United States vs. Billie Holiday

Stepping into the shoes of the legendary Billie Holiday is no small feat! To do so as your first acting gig is some REAL brave badassery! And yet, that’s exactly what Andra Day has done! Day started the awards season off with a bang when she took home the Golden Globe for Best Actress in a Drama! (Andra Day originally turned down the role because she didn’t consider herself to be an actress. Even the film’s director, Lee Daniels, was hesitant to cast her. Eventually, thanks to their managers, they both discovered their common passion for telling Holiday’s story authentically and the rest is history!) Winner or not, we full-heartedly echo the sentiment of our founder and CEO, Chris Witherspoon, in hoping that this is one of the first of many times we’ll be seeing Andra Day on our screens.

Carey Mulligan is positively radiant in Emerald Fennell’s feminist revenge thriller, Promising Young Woman. We KNEW Mulligan was talented ever since her breakout role in An Education, but this film cements her status as a true Hollywood star! PopViewer, Ryan O, even went as far as to call her our new Meryl Streep!

Mulligan has received honors this season from the Critics Choice Awards and the National Board of Review and has been part of a KILLER awards campaign! It’s a far cry from being rejected from every drama school she applied to! Some critics of Promising Young Woman have written off Mulligan’s character as being “crazy.” In an interview this past week with CBS Sunday Morning, Mulligan stated, “You know, in all of these films where men are enacting revenge, or they’re going on a mission for somebody that they love, I’ve never heard any of those men being referred to as crazy. She’s basically doing the same thing, and actually what she’s doing is a lot less drastic than a lot of the things that happen in these other films, but she’s ‘crazy.'”

One thing is for sure- we’ll be crazy with excitement if Mulligan’s name is announced Sunday night!

Four years ago, Viola took home an Oscar for Best Supporting Actress for her work in another August Wilson piece, Fences. The decision to put Davis in the supporting category was controversial at the time and likely the result of typical Oscars politics. (It also highlighted the gender biases in Hollywood with her being put in the supporting category while her co-star, Denzel Washington, was considered a lead for a role of equal weight.) It feels only right, then, that a supernova talent like Davis ALSO receive a Lead Actress award for her mantle! She is CERTAINLY deserving for her transformative performance as the blues singer, Ma Rainey! We mean- did y’all see her fat suit and that SWEAT?!? We’ll be rooting for Viola right alongside PopViewer, Leeky C!

If Frances McDormand wins this award on Sunday night, she’ll join the ranks of Katharine Hepburn, Ingrid Bergman, and Meryl Streep as the fourth actress to win three or more Oscars for acting! It’s company that she is MORE than deserving to be in! McDormand completely disappears into the character of Fern in Nomadland and, as one of only two professional actors in the film, anchors the entire story. She won the BAFTA Award for her performance and very well could take home her third Oscar. If she DOES win, you can expect (and hope for) one of her signature kooky acceptance speeches! We’ll be ALL the way here for it!

Pieces of a Woman

Having not won any of the other major awards this year, Vanessa Kirby enters this race as a bit of a dark horse. That being said, she is still very much a contender and incredibly deserving of all of the attention being thrown her way! (If not just for dealing with Shia LaBeouf!) Kirby captivated audiences and critics alike with her stunning delivery of a home birth which was filmed in a stunning single, long take. While she’s certainly an underdog, the other actresses could very well split the votes leaving Kirby with the prize! PopViewer, Ernest O, has seen this moment coming since the movie was first released!

So, who do you think will win? Download PopViewers to see more reactions to this year’s nominated performances and join in on the party!