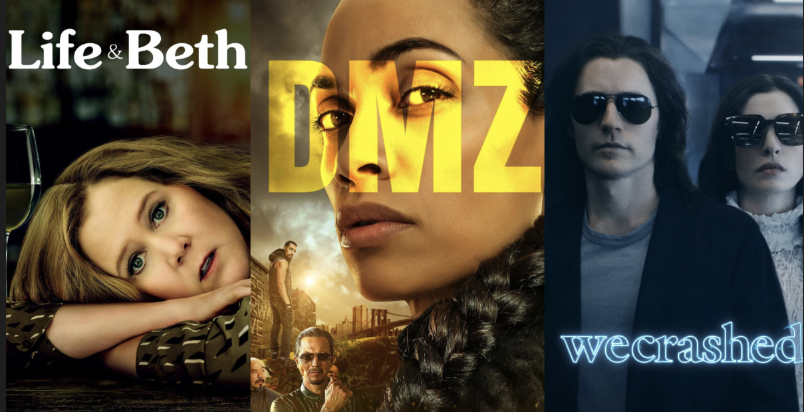 From comedies to thrillers, there is plenty of new content to keep you entertained this weekend. Here's what's poppin'!

In many ways, you could label this one a “coming-of-middle-age” comedy. Beth’s life looks impressive from the outside, but after receiving earth-shattering news, she is forced to engage with her past and reconcile with who she’s become and how she got there. Now while this all sounds very serious and deep, keep in mind that the series stars Amy Schumer, so you know you are in for some good laughs too! This is Schumer’s first time back on television since “Inside Amy Schumer.” While you wait to see her co-host the Oscars next week, this is definitely one you’ll want to check out!

Based on the acclaimed DC graphic novel, this four-part series follows Alma, a medic (played by Rosario Dawson) who gets separated from her son during an evacuation of New York City during the height of the Second American Civil War. After the war, the city has become a gang-filled wasteland that Alma must navigate through in a quest to find her lost son. It certainly doesn’t sound like a light watch. But with powerhouse talent behind the series like director, Ava DuVernay, we have to imagine that it will be worth the used tissues!

Another week, another cautionary tech start-up tale. But with talents like Anne Hathaway and Jared Leto behind this one, who’s complaining? They play the husband and wife duo behind WeWork, the shared office space startup which skyrocketed into becoming a global brand worth $47 billion in less than a decade. As the title of the series implies, however, what goes up must come down. How did things go so wrong? You’ll just have to watch to find out.

Think “Get Out” but set at an elite New England university. Regina Hall stars in this horror film about the terrors of higher education both past and present. Part commentary on the Salem Witch Trial, part commentary on America’s racist past, this film is fully terrifying.

The scammer documentaries just keep coming. This one tries to make sense of an NYC restaurateur who illegally funneled money out of her business to send to her lover who promised that he could make her dog immortal. Unlike vegan burgers, this tale is somehow entirely real.

Can we talk about this cast though?!? Jason Segel, Lily Collins, and Jesse Plemons star in this thriller about a billionaire mogul and his wife who arrive at their vacation home to discover that it’s being robbed. The pair gets held hostage and things only get stranger from there.

IS IT CAKE? (Watch on Netflix)

We suppose it should not come as a surprise that TikTok trends are now being greenlit as full-on series. The title of this one says it all. The show features skilled cake artists who create baked goods that look so realistic it will have you wondering whether or not it’s… cake.