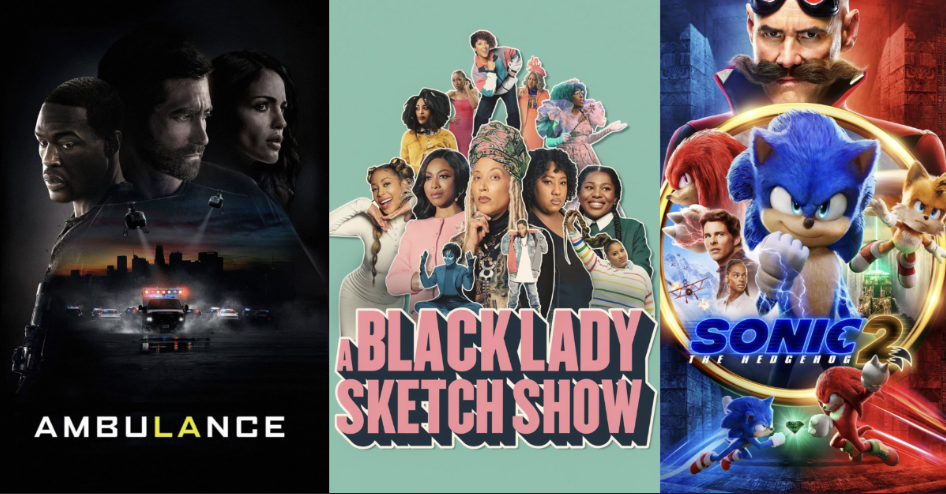 From heists to hedgehogs, there is something for everyone to watch this weekend. Here's what's poppin'!

Michael Bay directs and produces this action/thriller about about a veteran (played by Yahya Abdul-Mateen II) who teams up with his adoptive brother (Jake Gyllenhaal) to steal $32 million from a Los Angeles bank in order to cover his wife’s medical bills. Predictably, things don’t go as planned and the pair ends up hijacking an ambulance with an injured cop and EMT worker inside. A high-speed chase ensues in which the pair must fight to outrun the law and keep their hostages alive. Long story short- expect a Michael Bay movie.

HBO’s “A Black Lady Sketch Show” is back for a third season and the ladies are bringing the laughs! This new season will bring back many of your favorites from past seasons along with new characters and sketches that will have you laughing out loud. Guest stars this season include Ava DuVernay, Michaela Jaé Rodriguez, Raven-Symoné, Wanda Sykes, David Alan Grier, and more. We could all use a laugh right about now, right?

Everybody’s favorite blue hedgehog is back in action! This sequel finds Sonic eager to prove that he has what it takes to be a real hero. After learning of an emerald that has the power to destroy civilization, Sonic sets off an an adventure to find it before it falls into the wrong hands. Along with Sonic, the movie also stars James Marsden, Jim Carrey, Tika Sumpter, and Natasha Rothwell. While nothing groundbreaking, the movie should more than please fans of the games and young children alike.

Based on a memoir by American journalist, Jake Adelstein, this crime series documents the seedy underbelly and corruption of the Tokyo Metropolitan Police Department. The series is directed by Michael Mann (Heat, Miami Vice) and stars Ken Watanbe and Ansel Elgort.

TONY HAWK: UNTIL THE WHEELS FALL OFF (Watch on HBO)

For decades, Tony Hawk’s name has been synonymous with skateboarding. Now his story is finally being told in this new documentary which features archive footage and interviews with professional skateboarders and those closest to him.

ALL THE OLD KNIVES (Watch on Prime Video)

Contrary to what the title would have you believe, this movie is not about our kitchen knife block. Rather, it is a thriller starring Chris Pine and Thandiwe Newton who play spies who also happen to be ex-lovers. What happens when the two of them are both called upon to uncover a mole within the CIA? We’ll just have to watch to find out.

THE ULTIMATUM: MARRY OR MOVE ON (Watch on Netflix)

This new series comes from the creators of “Love Is Blind” and is hosted by Vanessa and Nick Lachey. The premise is straight forward enough… six couples are issued an ultimatum in which they either have to break up or get married. To do so, however, they must break up first and live with another stranger for three weeks in the same apartment building as one another. It all sounds messy and we’re here for it.

When cartoonist Keef Knight has a traumatic run-in with the police his entire outlook on life changes. Season 2 of this “comedy-with-a-spine” grapples with the question of “woke-ness” as an industry and whether or not it is more effective at bringing about meaningful change or simply raising dollars.

If you don’t know the name Aline Dieu, you won’t be able to forget it after seeing this one. This very real French film is a very much unauthorized biopic of Celine Dion. It stars Valérie Lemercier who plays a French Canadian chanteuse from ages 5 to 50. To be it mildly, the whole things is bonkers and we cannot wait to see it.