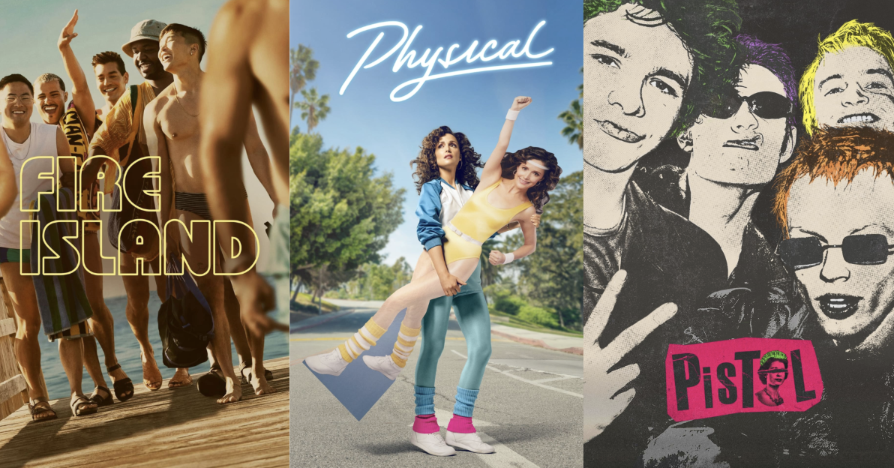 The weather's not the only thing heating up! Check out all of the ???? new content that is dropping this weekend and be sure to leave your reactions on the app!

Who’s ready to hit the beach? In this gay spin on Jane Austen’s “Pride and Prejudice” a group of queer best friends gather in the famous gay vacation destination, Fire Island, for their annual week of shenanigans. Tensions rise as they navigate a world in which social clout is based on the number of zeros you have in your savings account and the number of abs on display in your speedo. The movie stars Bowen Yang and Joel Kim Booster. A gay rom-com with two Asian male leads? Now that’s one great way to kick off Pride month!

Let’s get physical! This dark comedy returns to Apple TV for a second season. It stars Rose Byrne as a woman trying to become a star in the aerobics home video industry in the 1980s. This season also stars Murray Bartlett who was a breakout star on “The White Lotus.” If you haven’t watched yet, toss on those leg warmers and get into one of TV’s best-kept hidden gems!

Danny Boyle (Slumdog Millionaire, Trainspotting) directs this biopic series about UK punk rock pioneers, The Sex Pistols. It’s a story about a group of working-class kids who, through their music, shook the “Establishment” to its core and changed culture forever. Hilarious, emotional, and heartbreaking- the series is a rollicking watch that is sure to leave you rocking.

What happens when superheroes go rogue and start abusing their powers? Here lies the central concept of THE BOYS, one of Amazon Prime Video’s most popular series which returns to the streamer for a third season this weekend. Expect gore and a whole lot more.

THIS IS GOING TO HURT (Watch on AMC+)

Paddington (aka Ben Whishaw) stars in the British series as an overworked OB-GYN. The series plays with the concept of breaking the fourth-wall which will likely immediately remind many viewers of FLEABAG.

FLOOR IS LAVA (Watch on Netflix)

There’s no beating around the volcano- this show is the television equivalent of cotton candy in that there is nothing too it and will ultimately leave you empty. But if it tastes sweet going down, who the hell cares? The concept is clearly laid out in the title- contestants are thrown into escape rooms which they have to escape from without falling into “lava.” We can’t wait.

THE REAL HOUSEWIVES OF DUBAI (Watch on Bravo)

The Real Housewives franchise is going international with this group of women from Dubai. And baby, these women are RICH! Seasoned Bravo aficionados may recognize Caroline Stanbury from her time on the short-lived “Ladies of London.” We can only expect scorching hot drama- hey, they are in a desert after all.

Katori Hall’s strip club drama based in the Mississippi Delta returns to Starz for a second season. The series was widely acclaimed during its first season, so we cannot wait to see what lies ahead for the second.