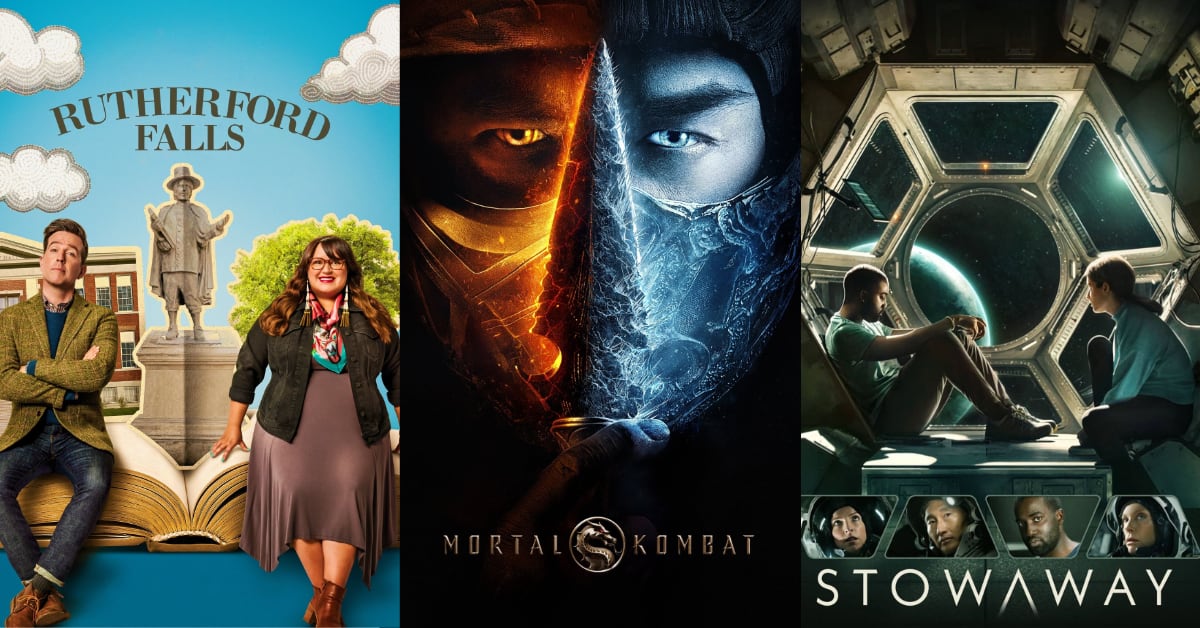 Hollywood is gearing up for the Oscars ceremony this Sunday night- but that doesn't mean that there's not plenty of content to keep you entertained while you chill your bubbly! ???? Here's what's poppin'!

If you’re a fan of “The Office” and “Parks and Rec” this one is for you! The series tells the story of two lifelong friends, Nathan Rutherford (Ed Helms) and Reagan Wells (Jana Schmieding), who find themselves in the middle of a controversy surrounding the relocation of a statue of their town’s founder. The series features one of the largest indigenous writing staff on TV and has already been praised for deftly handling serious and timely subjects (like white privilege and the marginalization of Native Americans) with the humor that you’d come to expect from an NBC comedy! Rutherford Falls is def a spot that you’re going to want to visit!

HBO Max and Warner Bros continue their “same-day launch” streak with this movie adaptation of the wildly popular video game series. If you’re looking for a plot, this might not be the movie for you. If action is what gets you excited, however, then you’re in luck! The movie follows a washed-up MMA fighter who finds himself targeted by a group of assassins from the Outworld. Together, along with fellow warriors, he trains and fights in a quest to unlock his arcana. If you have surround sound, we’re already worried for your neighbors!

Three’s Company, Four’s a Crowd. This movie follows the story of three astronauts on a two-year mission to Mars who discover a stowaway on board shortly after takeoff. The stranger jeopardizes the safety of everyone involved and, together, they must work to complete their mission and return home alive. It stars Anna Kendrick, Toni Collette, Daniel Dae Kim, and Shamier Anderson. If you’re a fan of space movies- this one is for you!

Despite this season feeling seemingly endless, we have ended up with an INCREDIBLY strong top 4! Tune in on Friday night as America’s Next Drag Superstar is crowned!

You had us at Cher! In celebration of Earth Day, Paramount+ is airing this documentary about Cher as she races to Pakistan to save Kaavan, “the world’s loneliest elephant.”

Get ready to laugh your ass off! A Black Lady Sketch Show is BACK for a second season and promises to have even more crazy characters and hijinks than the first!

In this new Netflix series, a young soldier unlocks a magical power that could unite her world, but first, she must battle against the sinister forces that threaten to destroy it.

Regardless of your thoughts on the films nominated this year- the Oscars promise to be a night to remember. After a year of virtual ceremonies, the show WILL be held in person in multiple locations including LA’s historic Union Station and the Dolby Theatre. The team behind the show has said that it will “feel like a film.” We can’t wait to see what they have up their sleeves!

Oscars Predictions 2021: Our PopViewers' Picks For This Year's Winners