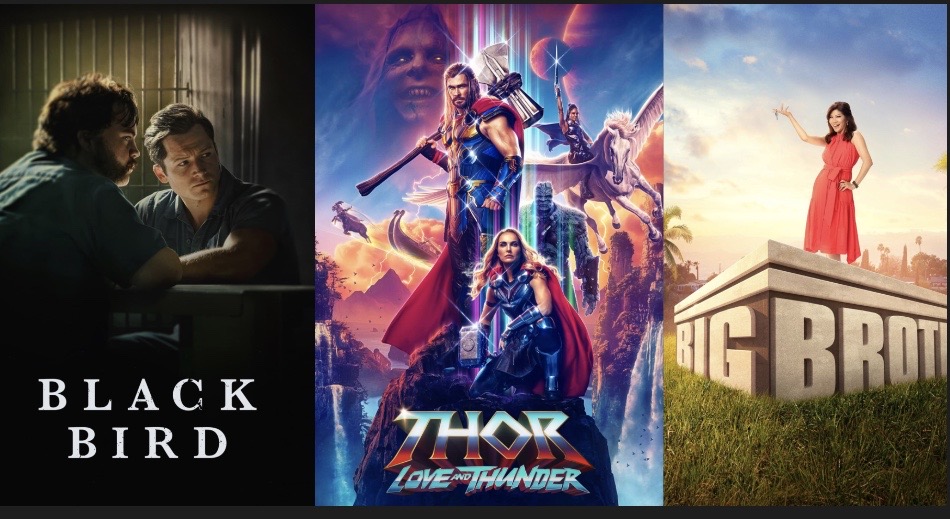 This weekend's watch list is one for the GAWDS! ... Literally! ⚡️ Here's what's poppin' this weekend!

Thor’s retirement plans get derailed by an intergalactic menace who’s on a mission to rid the galaxies of their Gods. To intercept the harrowing quest, he calls on the help of some familiar characters to unravel the truth behind the menace’s mysterious and deadly need for vengeance…Talk about catching someone in their villain era?! Catch Thor: Love and Thunder in a theater near you! ⚡️

24-hour surveillance, a smattering of personalities clashing and gelling, and all the tea anyone could possibly handle (..and maybe even a bit more than that!), the 24th season of Big Brother is on and poppin’ three nights per week from now until September!

Based on the James Keene novel In With the Devil, this limited series is a true-crime lovers’ dream…or nightmare, depending on how you look at it, tells the story of Keene, who is given an offer he can’t refuse in order to keep himself from serving serious time in prison. The life-saving offer? He has to worm his way into a friendship and get a confession out of a suspected murderer. NBD…Right? … RIGHT?!

Been sittin’, waitin’, wishin’ for a rom-come type series to sink your lovesick teeth into? Viewer? Meet ‘Maggie’; a psychic who has become accustomed to seeing the lives of others unfold in advance suddenly gets a glimpse of her future romantic endeavors—and, well…Let’s just say, it’s complicated and will force her to focus on the present for once.

In a futuristic, sci-fi mystery, a pilot from Earth named Bella starts digging into the details behind a murder that took place in a utopian colony on the moon. Buckle up, ya’ll…This one promises to be gripping!

The Sea Beast (Watch on Netflix)

Let’s be honest…We all might consider doing some slightly outta pocket things to meet our heroes, but when a young fan stows away on the ship of a famed sea monster hunter, the sea isn’t the only thing causing a ruckus. From heavy hitter director Chris Williams (Big Hero 6/Moana), The Sea Beast is fun for the entire family!

The Anarchists (Watch on HBO)

This docu-series, which took filmmaker Todd Schramke six years of heavily involved research to make; follows the rise and inevitable, chaotic fall of the “muh freedoms!” group; an anarchist, libertarian and evangelistic bunch whose movement veiled a slew of coups, crime, and corruption. Definitely put the kiddos to bed and pop the popcorn for this one!

What to Watch This Weekend!